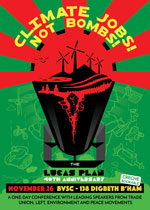 (Flyer for the Lucas Plan Conference, which was held on 26th November 2016 at BVSC in Birmingham. Design: The Coastal Invention Company)

In 2016 our conference aimed to re-open the debate about industrial conversion and democracy.

The conference provided fresh impetus to the discussions and plans taking shape around the idea of a ‘Just Transition’.  We talked about existing approaches, such as the ‘One Million Climate Jobs’ plan, and also brought in plenty of grassroots voices.

The conference focused on the following topics:

See the full event programme and the videos from the conference.